This morning at 2:36am, I was awakened to the sounds of Carter saying, “Oh no, no no.  Oh NOOOOO.  Mommy, puke bucket!”  I woke up Tim, ran into Carter’s room with the first thing that I could find that was big enough to puke in, while Dad tried to find the puke bucket.  I was hoping that since I didn’t hear any actual puking, that maybe, just maybe Carter hadn’t thrown up yet.  I was wrong, so very very very wrong!  His shirt was covered in puke, as was his pillowcase (and his pillow), his sheets, quilt, and mattress pad….not to mention that the puke has seeped through to the mattress.  EWWWW!

So while Tim took Carter into the bathroom to continue puking in the puke bucket (because Carter will not throw up in an actual toilet), I had the fun job of getting all of the sheets off the bed, and started the first of THREE loads of laundry (one for the sheets and clothes, one for the quilt, and one for the mattress pad).  Fun times!

We then got Carter settled on his little pull-out couch on the floor of our room with a couple blankets on top of the couch (just in case!), his bucket, and some paper towels.  We had just shut the lights off and climbed into bed when he started puking again….luckily into the bucket!

I’m just very grateful that he decided to puke in his bed and not on me, because let me tell you, I am ALWAYS the one that gets puked on.  If one of the boys is going to throw up on someone, it’s NEVER Dad!  It’s always always always ME!  And they never throw up after we put a lot of blankets down….oh no.  Once we’re set up and ready for the puke, they throw up in a bucket.  But when we’re not ready, it’s in a bed or on the couch, which is why I’m probably always puked on.  If I’m holding them on the couch and they start puking I use myself as a shield.  I’d rather have puke on me than on my off-white couch (I’m insane, why the hell I thought getting an off-white couch would be a good idea when I knew I wanted kids is BEYOND me.  Apparently I had no idea how many times my kids would spit up, throw up, or just spill crap on my couch.) 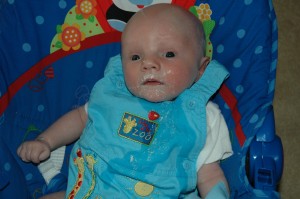 Carter at 1 month, probably the first time he actually threw up on me. This is also the only picture I have of either boys with puke on them. Apparently after the first couple times, it's not cute or picture worthy any more.

Throwing up over night is an automatic NO SCHOOL for Carter.  But when he woke up this morning, he was feeling just fine.  Ironic how he woke up minutes after the bus came.  🙂  He must have ate something last night that didn’t agree with him.  I’m just glad that he is feeling better.

One Response to Puke Fest 2011