Mr. Stan has had a pretty rough couple of weeks.  It started with my bright idea to put Carter in charge of feeding him.  I thought this would be good for Carter (not necessarily the best thing for Mr. Stan) and would teach him some responsibility.  I’d have put him in charge of feeding Noey, but I can just picture Carter leaving the cage open and then Mr. Stan would have a nice tasty treat.

Carter was really good about giving him food and water for a couple days….but a week and a half later and he’s over it.  I noticed that his water was running quite low today and he needed some food.  I reminded Carter to feed him, and his response was, “Can’t you just feed him Mom.”  It’s a good thing we didn’t get him that python he wanted.  🙂

I don’t think Mr. Stan minds the dehydration.  I think he’d much rather be a little thirsty than have THE COOP MONSTER trying to climb up for a visit every chance he gets.  Cooper is quite the little climber and is always moving his chair with the booster seat next to the cat perch so he can attempt to climb up to get Mr. Stan.  I’m pretty sure he wants to be a cat when he grows up.  Apparently my scolding has paid off, because he no longer tries moving his chair to the cat perch. 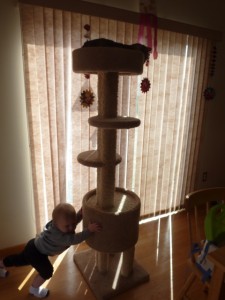 Cooper now just pushes the cat perch to his chair instead.  I feel like he’s too little to be this smart.  🙂