Apparently Carter is running for judge…..and no one told him!  I’ve seen the signs around for a couple  of weeks, but Carter just noticed them earlier this week.  He saw his name on the sign and wanted to know what the rest of the words said.  He’s pretty upset about the whole thing.  He doesn’t really want to be a judge, and is pretty sure someone is tricking him.  But he had fun getting his picture taken in front of the sign today. 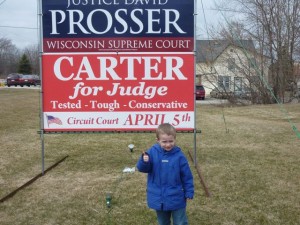 Don't believe what you read, Carter is NOT running for judge.

He’d also like people to know that he’s never taken a test, he’s not very tough (unless he’s fighting with his brother), and since most days he comes home from school with his pants unsnapped….he’s not very conservative!

So on April 5th, please DO NOT vote for Carter for Judge.  He’s only 4 1/2 and he doesn’t have time to be a judge.  He has school in the mornings, he likes to watch a couple cartoons during the afternoon, then around 3pm he likes to fight with his brother for a bit, and has to be home by 5pm for dinner.  It just won’t fit into his busy schedule.

This entry was posted in Carter aka Buddy Alligator and tagged Carter for Judge. Bookmark the permalink.

One Response to Here Comes the Judge