Carter and I recently were at The Learning Shop looking for a birthday present for Cooper when he noticed some frogs near the cash register.  And like any normal 4-year old boy he was fascinated.   We found out that they are African Dwarf Frogs, they come in a pretty small container with gravel and a bamboo plant in the corner.  According to the clerk you need to feed them twice a week and clean out the container about 4 times a year.  So when Carter asked if he could get some, I was seriously considering it (which I know is crazy since we already have a cat and a 3-legged hamster, but I think even I could handle feeding something twice a week and making Tim clean out the cage 4 times a year!) 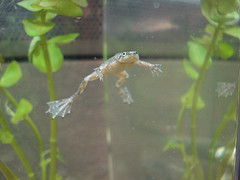 Picture of an African Dwarf Frog that I found on Flicker taken by psyte.

But upon doing a little research on African Dwarf Frogs, I found out that two frogs need no less than 1 gallon of water, and I don’t think the container they live in could hold a gallon of water (but I could be wrong).  I know that I don’t want to invest in an aquarium, nor do I want to mess with cleaning it out.  My family had fish when I was growing up, and they aren’t exactly fun to clean out (not that I ever ever helped, but it looked pretty gross).  🙂

I hadn’t yet told Carter that he won’t be getting a pair of frogs for his birthday yet (which is coming up in a few weeks), but apparently he’s over frogs.  On the way to swimming lessons he asked Tim if he could get a snake.  Tim replied, “No, I don’t think Mom will let you have a snake in the house”, to which Carter said, “But I don’t want a rattlesnake, I want a BIG pyfon”.  (Pyfon would be Carter for python). 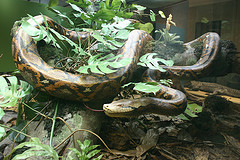 I may need to rethink my position on the frogs, I'm pretty sure a python could eat Cooper! (Picture by Ryan Somma)

Why oh why couldn’t I have had two girls instead?  They’d be happy with a little fluffy puppy or a cat.