For those of you who don’t already know, I sort of like Box Tops for Education.  My little obsession started last year after Tim and I attended 4K Orientation.  We learned that the 4K class was having a special contest to see which class could turn in the most Box Tops at the beginning of school.  As soon as we got home, I started contacting EVERYONE that I could think of that would be willing to collect Box Tops for Carter.  Within a few weeks I had people sending them to us.  Not too long after, Pick N Save had a Bonus Box Top Promotion (they run these every few months), and before I knew it I had over 2000 box tops….and my basement looked like this. 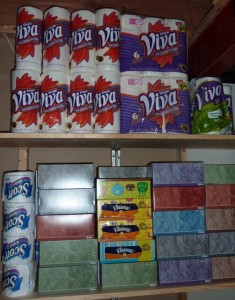 The Kleenex and Viva Paper Towel backstock in my basement. 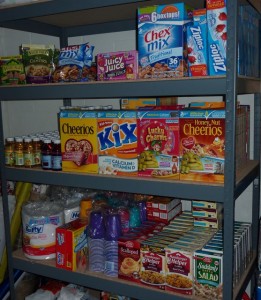 Cereal anyone? Chex Mix? Hamburger Helper? How about some Juicy Juice?

By the time that Back to School time arrived, Carter and I had collected over 4000 box tops.  He was pretty excited to bring them into school, and his class ended up winning the Back to School Contest….by a landslide! 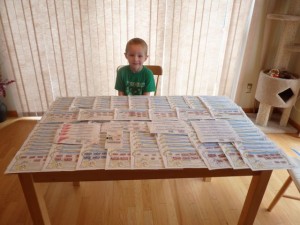 Carter with all of his Box Tops

I love the Box Tops for Education so much, that I asked to be one of the coordinators for the next school year.  I was so excited when I found out that I could be a coordinator, and in fact they let me start a little early so I could attend Box Tops University in Chicago last Friday.  I had such a blast!  I learned a lot about sending Box Tops in, different contests that other coordinators have done in the past, and how to get more people involved in our community.  And I was shocked when the person in charge of the Facebook account for Box Tops for Education actually recognized me when I walked past.  Apparently I must post on the page a lot more often than other people.  🙂

And one of the best things about Box Tops University is the AWESOME goodie bag everyone received, not to mention the 100 Bonus Box Tops we received for attending. 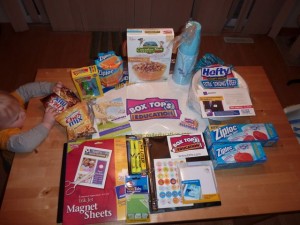 My AWESOME goodie bag from BTU.....Cooper kept trying to sneak the Chex Mix. 🙂

Today I picked up my first batch of Box Tops from school to count.  I’m in charge of counting and shipping out all of the Box Tops for the month of April.  I only had 166 to count, but it was thrilling none the less.  I’m sure when I go back next week there will be hundreds waiting for me.

My name is Lisa, and it’s been 2 hours since I clipped my last Box Top.