A couple months ago Carter came home from school and told me that his socks were wet.  We had had a few warm days, and most of the snow had melted.  I figured that his boots had gotten a little wet, and that was the cause of his wet socks.  Wet was an understatement.  He took his boots off and I DUMPED water out of them.  I couldn’t believe that he actually wore them home (he had an extra pair of socks in his backpack and he always has shoes in his backpack to wear during school).

Luckily this occurred on a Friday, so I had all weekend to attempt to get his boots dry.  I squeezed them both out on Friday, put paper towels in on Saturday to absorb some of the water, and used my blow dryer on Sunday night to try to get them dry.  On Monday morning they were still pretty damp, so Carter went to school with plastic bags in his boots (he looked silly, but it worked).

That day Cooper and I headed off to Walmart in search of rain boots for Carter.  Figuring that he wouldn’t wear them all that much, I decided to get them a couple sizes big so he could get more use out of them.  We got a pair of Spider man boots, and Carter LOVES LOVES LOVES them.  He loves them so much, that he wears them to school EVERY DAY.  He has to wear them when we run errands, when we go out to eat, he even wanted to wear them when we went on a bike ride last week.

I’ve noticed that none of the other kids in the neighborhood have been wearing boots to school lately, and I asked Carter if he was the only kid in his class that wore boots to school anymore.  He informed me that he was, so I told him that unless it’s raining outside (which it was today), that he would have to wear his shoes to school.  And since he actually wore shoes to swimming lessons yesterday, I reminded him to make sure to put them in his backpack so he’d have them for school today.

Carter looked at me and said, “Mom, you know that if you forget to bring your shoes you have to wear your boots all day.”

“Yes Carter, I know that”, I replied.

And then Carter looked up at me with a big smile and said, “If I forgot my shoes, then I could wear my Spider Man boots all day.  Wouldn’t that be awesome?” 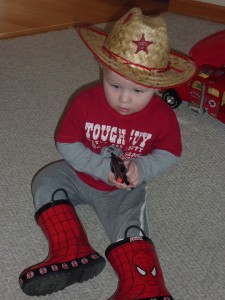 Cooper also enjoys wearing the Spider Man boots when he and Carter are playing Cowboys.