I can remember the day that Carter learned how to suck his thumb.  We were at my parents house, he was only a few months old, and he stuck his little thumb in his mouth.  OMG, it was the cutest little thing that I ever saw.  There was my son, he was so tiny and cute (not to mention smart….I mean come on, it’s not easy to get a thumb in your mouth! LOL), and he found his thumb and got it in his mouth.    After that day he never wanted a pacifier again.  And that was just fine with me. 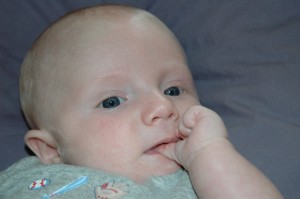 Carter at 2 1/2 months sucking his thumb. Doesn't he just exude cuteness and intelligence?

Fast forward 4 1/2 years and I still have a little thumb sucker.  And let me tell you, it’s not so cute anymore!  He is constantly sucking his thumb.  He’ll be sitting on the couch watching cartoons sucking his thumb.  We’ll be driving in the car and there he’ll be with his thumb in his mouth.  And I’m sure his thumb is in his mouth every night as he’s falling asleep (which wouldn’t be that bad….at least it would stop the teeth grinding!)

It has reached the point to where his dentist has told us that he really needs to stop.  He actually told us this about a year ago, and he’s still at it.  I’ve tried putting the nasty tasting nail polish on his finger nail….he liked the taste!  The dentist suggested wrapping it up so that he couldn’t suck it.  The little turd takes the wrapping off in a couple of minutes.  I’ve asked the dentist to talk to him…..yeah, that didn’t work!  And every time I see him with it in his mouth I tell Carter that I’m going to have to cut his thumb off if he doesn’t stop.  That works until I leave the room, and then right back in it goes.

So I knew when we had our second child that NO MATTER WHAT he was not going to suck his thumb.  And with Cooper it wasn’t really an issue.  He took to a pacifier really well.  He tried a couple times to put his thumb in his mouth, but I just stuck that pacifier back in and Cooper didn’t seem to mind.

I’d say that Cooper enjoyed his pacifier days.   And yes, I said enjoyed because being the mean mom that I am, I decided about 2 weeks ago to cut him off cold turkey.  We took all of the pacifiers that we could find and hid them.  We told Cooper that the little babies needed them.  I thought for sure we would have a riot on our hands (especially since Carter told Cooper that we were lying and that they were in his dresser drawer).  The first night he fussed for a little while and then went right to sleep.  He asks us on a daily basis where his “pacies” are, and then will go on to tell us that the babies have them.  I was pleasantly surprised how easy it was for him to give them up. 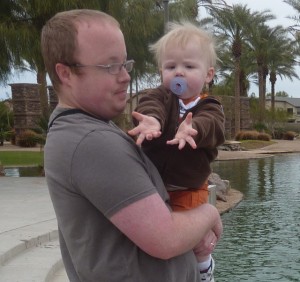 The last-known photo of Cooper with a pacifier. He's just learned his Nuk will go bye-bye.

I will say that he found two of them lying around.  He found one under his crib and then one under our bed.  And let me tell you, I have never seen a child try to squeeze themselves under a bed with such determination as Cooper.  I can tell you that Cooper is a big “little” guy, and there was NO WAY his big old head was going to fit, but he sure did try!  🙂  Both times I let him have his pacifier for a few minutes, but then took it away at snack time and he never asked for them back.

So I have learned a very important lesson.  You can’t cut your child’s thumb off, but you sure can take a pacifier away!  🙂

This entry was posted in Carter aka Buddy Alligator, Cooper AKA Chunky Monkey, Parenting challenges and tagged thumb sucking. Bookmark the permalink.

3 Responses to The Thumb Wars