My husband and I had been married for about nine months when we purchased our condo in July of 2004.  Shortly afterwards we decided to get a cat.  I wanted a baby, hubby wanted to wait a bit….so we got a cat.  I figured if we could keep the cat alive for a year, we were ready to be parents.  🙂

We went to our local Humane Society and found Tristan.  His name was actually Tyson, but with the whole Mike Tyson thing and the fact that Tyson the cat liked to bite to begin with, we figured it wasn’t the best fit.  The name didn’t stick for very long, we started calling him Stanley, and then Stan, and then for some reason Mr. Stan.

We fell in love with him immediately at the Humane Society.  He is a beautiful cat.  We filled out the paperwork and had to come back the next day to pick him up.  When I came back they informed me that he liked to bite and wasn’t recommended for a family with small children.  We didn’t have children at the time, and the cat was so darn cute….I just couldn’t not take him. 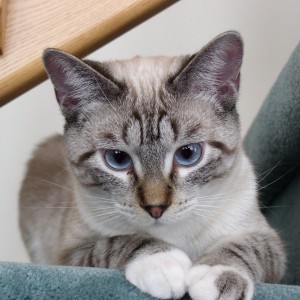 Mr. Stan a few months after we adopted him.

Mr. Stan had a couple of really good years.  He was our little baby.  I probably have more pictures of the cat then I have of Cooper (I’m not kidding….I probably have 3 times more pictures of Carter than I have of the cat, but poor Cooper doesn’t have as many).  We even threw Mr. Stan a birthday party when he turned one.  And then in May 2006 Mr. Stan’s world turned upside down….Carter had arrived!

Mr. Stan went from being our little baby to getting his tail pulled in a matter of months.  But he has been a real trooper.  He outgrew his “biting” phase long before Carter came along, and has only bit the boys a handful of times (and let me tell you, they DESERVED it!)

When ever the boys get a little too out of control, decide to chase him, or hug him until his eyes are about to pop out Mr. Stan just climbs to safety….that was until a few weeks ago when Cooper decided he’d like to become a cat.  Poor poor Mr. Stan. 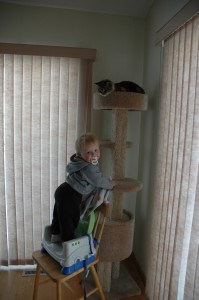 Cooper's attempt at being a cat.

This has become somewhat of a daily occurrence.   Luckily for Mr. Stan, Cooper hasn’t made it to the top…..yet.

At least he’s better off then our three-legged hamster Noey.  🙂  Learn all about Noey and his adventures  tomorrow.

This entry was posted in Carter aka Buddy Alligator, Cooper AKA Chunky Monkey, Noey, Stan The Cat and tagged 3-Legged Hamster, cat. Bookmark the permalink.