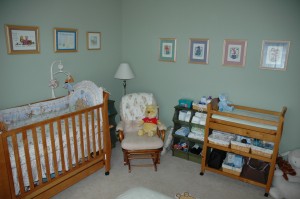 This is a picture of Carter’s room (from when we lived in our condo), taken about a month before he was born.  We had purchased the crib when I was only about 3 months pregnant.  The whole nursery was ready to go months before he was born….and let me tell you, I don’t think it was as clean as it was in the picture EVER again.

I’m sharing the picture because today we took the crib down.  🙁  I know that I should be happy, but part of me wonders if I’ll ever be putting it back up again.  (I know Tim would be THRILLED if this were the case!)  Friday night Cooper got his very own big boy bed.

I thought that he would be excited.  Carter started sleeping in a big boy bed (which is actually a regular sized twin bed that is higher off the ground than our bed) when he was about two months older than Cooper is now.  Since we got Cooper a toddler sized bed, I thought that he’d be ready, and I was secretly hoping that it would put an end to wanting to sleep in our bed EVERY SINGLE NIGHT! 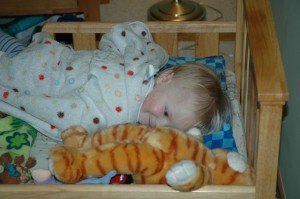 Cooper LOVIED his new Big Boy Bed right after we assembled it. 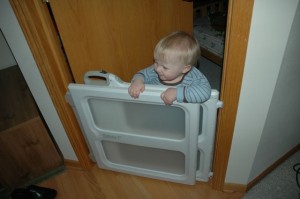 Cooper trying to escape from his room after realizing that he in fact does NOT LOVE his new Big Boy Bed.

Now I knew when we first picked his new bed up that I wanted to put the gate up.  I didn’t want a 2 year old walking around the house in the middle of the night.  I wanted him to stay in his room.  Well, Cooper DID NOT LIKE THIS IDEA!  He didn’t want to stay in bed, and after playing with toys for a bit, DID NOT want to stay in his room.  He stood in the doorway yelling, “Mommy, where are you” for a good half hour (while we hid in the basement), and then proceeded to cry or say “Mommy, we will rock you” (which is “Cooper” for Mommy rock me).  We rocked him, we laid next to him on the floor, but unless he actually falls asleep with us in the room, he will get back out of bed and stand in the doorway.

And you’d think once we actually got him to go to sleep he’d sleep through the night.  OH NO!  Oh no no no no!  He wakes up between 1-2am every night calls out for Mom.  And then if I don’t come, he cries.  Last night I just yelled, “Mommy is sleeping, go to sleep.”  It didn’t work.  🙁

But we are not moving backwards.  We took the crib apart today, moved his toddler bed to where the crib was, and we are going to keep trying every night until he goes to sleep by himself.  (And just in case you were wondering, he went to bed at 8, and an hour and a half later and he is still awake).  I just hope he passes out from exhaustion soon. 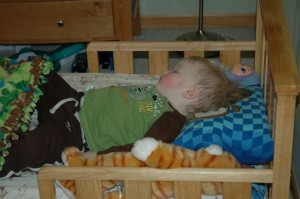 Cooper during nap time on Saturday. He fell asleep in the van on the way home from a birthday party.