I can’t remember when exactly Tim and I first looked at our current house.  I know that we moved in at the beginning of July 2007.  I’m assuming we must have toured it for the first time at the beginning of March…..before the tulips start popping up, because I would have remembered seeing so many tulips!

I was pretty surprised in the spring of 2008 when so many tulips starting popping out in March.  Carter and I went out as soon as I saw them sprouting and dug each and everyone out.  Or so I thought.  Later in the year, Tim and I decided to dig out most of the shrubs and plants in the front of our house (I’m not sure who planted them all, but they must have been drunk).  I couldn’t believe how many more bulbs I found when we dug everything up.  But at least we found them, that meant no more tulips next year. 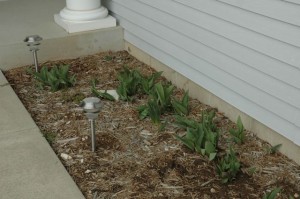 And then in late March 2009 I was horrified when I looked outside and discovered more FREAKING TULIPS!  I went outside, 9 months pregnant, and dug up every tulip that I could find (cursing the whole time, and kinda hoping the Cooper would just pop out from all the bending over!)

So last year I was sure that I had gotten them all out, I mean how many FREAKING TULIPS could the previous owner have possibly planted?  I’m sure that by this time I had dug up well over 150 bulbs and tulips.  But at the end of March 2010 (I think I may have still had my walking cast on from my foot surgery) the FREAKING tulips made their appearance and once again I dug up what I could find.

I bet you’ll never guess what I saw outside just the other day? 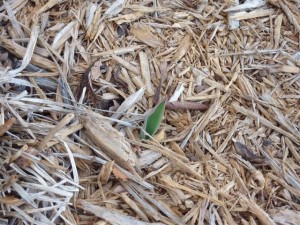 One of the many tulips that have made their appearance so far this year. 🙁

Yep, TULIPS.  I HATE HATE HATE TULIPS!!!!!!!!  I’ve spotted well over 10 of them, and I’m sure they have friends buried in the ground that will come up next year.  They are multiplying every year.  I can’t win….but I will not surrender!  Tomorrow afternoon I will be out with my shovel!  This is WAR!

This entry was posted in Uncategorized and tagged landscaping, tulips. Bookmark the permalink.

One Response to The Tulip Wars