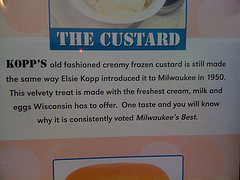 Photo by: Shes Not There

Tim and I decided to take the boys out for ice cream this evening.  I’m not really sure why, we were doing yard work before we left and they were NOT listening.  But I was craving ice cream, and we needed to make a quick stop at Home Depot….so off to Kopp’s we went.

For those of you that haven’t heard of Kopp’s, they have AWESOME frozen custard.  (They also have awesome burgers and yummy onion rings too!)  One of my favorite things about Kopp’s is they let you purchase extra cones for your frozen custard.  I love cones, so Tim will usually order three scoops of frozen custard, and I’ll get two empty cones and just put a little frozen custard in each and I’m good to go!

So tonight Tim ordered his usual three scoops of frozen custard and I ordered two scoops with four empty cones, and we got all of this for around $6.00 (not bad for four people!)  We found a seat, and I started putting a couple spoonfuls of ice cream in cones for both boys.  I do this for several reasons.  First, they can never ever finish a cone by themselves.  Secondly, whenever we get a regular cone for them it always starts to melt before they can eat it.  And finally, it is WAY LESS MESSY!  My two scoops with four cones was just the right amount for me and the boys.

A lady next to us was watching me, and when I finished she said, “That is such a good idea, I wish I would have thought of it when my kids were little.”