Carter’s teacher sent out an email last week informing parents that each 4K student would have a piece of artwork displayed at a children’s art show at WCTC (local technical college) today from 5:30-7pm.

I told Carter about this when he got home from school thinking he’d be excited. He was not. According to Carter he in fact DID NOT draw a picture at school for an art show, was certain that it must be someone else named Carter, and was pretty sure that the people running the art show were trying to trick him. The only reason he wanted to go was to yell at the people for tricking him.

So we arrived at the art show, and Carter’s teacher was there along with the other 4K teachers, and we found his piece of art right away. And what do you know, Carter remembered making it. Go figure! 🙂 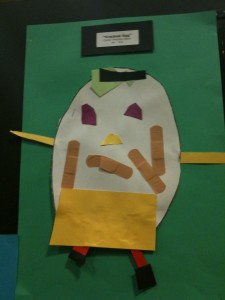 This entry was posted in Carter aka Buddy Alligator, School, Uncategorized and tagged 4K, artwork, WCTC. Bookmark the permalink.