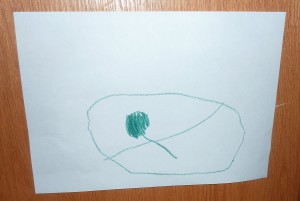 A few nights ago, Carter asked me if he could make some signs for the house.  He’d made two signs that he had hung on his bedroom door a couple of weeks ago, one to keep big people out of his room and another to allow Lisa inside (the “GO Mommy” sign).  I asked him what kind of signs he wanted to make and he had two particular ideas in mind.

The first was a “Private Drive” sign.  He wanted this to be posted on a stick in our front yard to let people know that we had a private drive, and that they weren’t to enter.  He didn’t want the bad people to come and take our house.  The only place I can think of that has a Private Drive sign is my parent’s house, so I’m fairly certain that’s where he got the initial idea from.  It was his second sign concept that had me confused.

After I helped him spell out Private Drive (which he flipped the “d” around on, Toys R Us-style) I asked him what he wanted to have his next sign read.  He replied, “I want to make a No Screw sign”.  Now I have a tendency to run my mind through the gutter when certain, um, key words are mentioned, and this was no different.  I was, understandably, a bit concerned and held my breath awaiting his answer when I sheepishly asked him “Oh, really…what’s that sign for?”.  In my mind there were two possible outcomes for this question.  One good…the other, not so much.

Thankfully his answer fell on the side of childhood innocence.  He wanted to make a sign to let people know not to bring screws into his room because, as he put it, “they’d start to build stuff and my room’s already built.  It’s done.”.  After a quick exhale and a “thank God” thought, I gave him another sheet of paper to draw on.  After making his sign he asked for tape and hung it on his door.

As I tucked him into bed that night, he left me with one final set of instructions (in a stern voice). “Now Dad, you have to remember that’s a screw on the sign.  It’s not a rocket, or a pin, or a missle…it’s a screw.”  My reply was quick and to the point, “Don’t worry, I WON’T forget that!”.

This entry was posted in Carter aka Buddy Alligator and tagged art, creativity, design, signs. Bookmark the permalink.