Anyone that lives near Milwaukee is pretty familiar with road construction.  First it was the Marquette Interchange project, now it’s the Zoo Interchange.  Luckily we don’t go into downtown Milwaukee often so these two projects haven’t caused us many problems.

But now there is a lot of construction going into Milwaukee from as far away as Pewaukee.  This means a lot more people in Waukesha county are affected by road construction this year.  I take the interstate into Brookfield several days a week, and there are a lot of orange barrels going up.

While this may be problematic for some, Carter thinks this is AWESOME!  He loves road construction.  He loves seeing John Deere vehicles on the road, loves huge cranes (so he loves when they are replacing bridges!), and doesn’t understand why all the construction workers don’t wave back to him (I’ve explained to him several times that they probably don’t see the little boy in the back of the van with the tinted windows!)

So on Friday we were heading into Brookfield on I-94 to pick up some last minute items for Cooper’s birthday party.  We were driving along when Carter told me that he would like construction cones for his birthday, which is coming up in May.  I thought this was a strange request for a birthday present, but I was sure he’d find several ways to use them.  I pictured him outside with the cones on the driveway or sidewalk, and he’d ride his John Deere bike around them.  Or maybe he’d get out all of his John Deere tractors and play “construction”.

Friday night we ran to Walmart quick, and I saw some orange cones in the sporting goods section, so I picked them up.  They were less than $4, so I just let Carter have them on the spot.  He got them home, and I had to open them up immediately.  And he played construction with them all right!!! 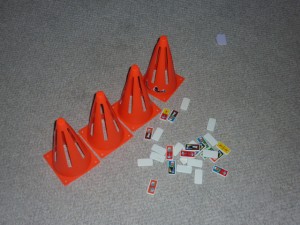 I had asked Carter to pick up the dominoes that he had dumped out earlier in the day.  A couple minutes later I looked over and discovered that he put his orange cones out instead.  This way no one would step on them, and he could leave them out.